The Hammond Chord Organ was produced for those with little musical background. It was possible to make a great deal of music from this small single manual instrument. Unlike the other Hammonds pictured on this site, the Hammond Chord Organ did not use a tone wheel generator to produce the tone but rather used vacuum tubes. 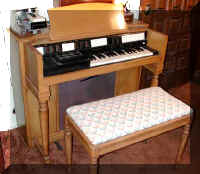 This is the Hammond Chord Organ note the small black lever just visible under the keyboard. It is the volume control and on/off switch. 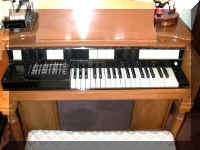 This picture shows all of the controls of the instrument. The left hand buttons produced pitches is a similar fashion as an accordion.  The black and white tilting tablets over the key altered the tone of the instrument.

Here is a view of the left hand controlled buttons for producing chords. The black bar at the front edge of the button area produces the off beat chords. There are two small pedals just barely visible under the button area, these pedals produce the root/fifth pedal pattern, the player has only to alternate between the two pedals and they automatically select the root or fifth to correspond with the chord being played. 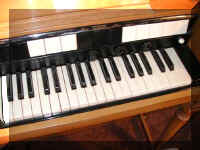 A view of the right side of the chord organ showing all the keys and many of the tabs that alter the tone.  The three round knobs control the volume of the pedal, organ and solo section.

Return to the Hammond Products Page

Return to the Organhouse Home Page