In the process of collecting almost 250 Aeolian/Hammond rolls I ended up buying three Aeolian/Hammond organs. The first instrument  was purchased from the  Music Museum in Traverse City, Michigan and has a blond finish on the console and Leslie speaker. It is a fairly late instrument having a serial number #9181.

The second Aeolian/Hammond was purchased in Billings Montana and is the more traditional brown finish. This instrument is serial number #9205 which I understand is 3 from the end of the line of 208 instruments produced. This instrument is unusual in that it has vibrato rather than the usual tremolo that Aeolian/Hammonds usually had. As to whether it was a factory modification since this was one of the last Aeolian/Hammonds made or was a modification made at a later date I don't know. However, there are no mounting screws to indicate that the old style preamp was ever installed.  This is the instrument I intend to keep.

The third Aeolian/Hammond was purchased from the relatives of the long time Hammond Dealer in Salem, Oregon. This instrument had 230 rolls with it. This instrument is an early one with the serial number of #9151. Placement of many of the components is considerably different than the later versions. I find it interesting that such a small run over a rather short period would have the major modifications that these instruments show. The pictures should show the major changes which, while not earth shaking, are interesting.

The first set of pictures are the most complete and basically show most of the components of the Aeolian/Hammond. After that set will be some pictures of the early model Hammond BA. These can be compared with the first set to see the differences between the early and later versions.

The Rolls In My Collection

Remember, you can click on every picture to see a larger image!

This is the picture from which I purchased the instrument from the museum. It 's original finish is blond which is highly unusual. The wooden box behind the expression pedal contains the vacuum pump. Note that even the wood sides of the chime keyboard is finished blond. The speaker is an old Leslie 30A Vibratone. 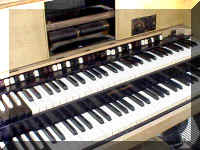 The keydesk of the console. Note the chorus generator drawbar to the left of the start switches. It closes a set of 37 contacts to bring the slightly detuned chorus generator tone wheels on line to give the sound a slight undulating effect. 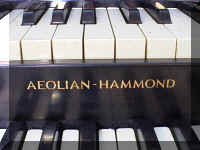 The identity plate between the manuals. Note that the Aeolian name comes first! 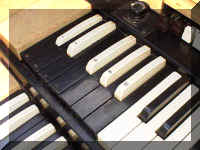 The presets, notice that they are numbered rather than given instrumental or organ ensemble names. Tremulant control is above presets. The tremolo gives an intensity rather than a pitch change. 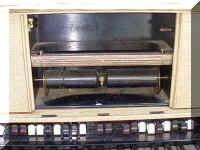 The player spool box above the drawbars. 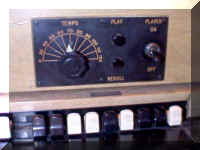 A picture of the player control panel. 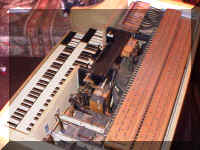 This picture shows much of the player mechanism. In the lower left hand corner is the pneumatic air motor for the spooling mechanism. Behind it are the two primary stacks that supply vacuum to the individual pneumatics located under the keyboards. Center top shows the pedal pneumatic above the 12 note pedal contactors. 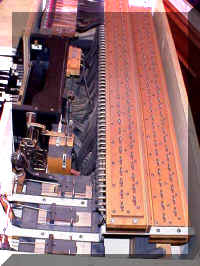 Here is a closer view of the air motor, chain drive and the two primary stacks. 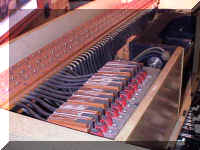 The front left interior view or the pedal player pneumatics that push through the red felt to the pedal contactors. 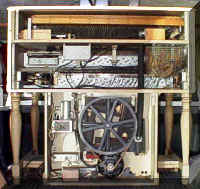 Here is the full rear view of the console. On top is the player primary stack with tubing going to the tracker bar and /or the secondary pneumatics under the keys. At the far left of this compartment is the speed control mechanism for the air motor. The next section down contains the stacked chorus and main generators with the chorus on top. In the lower section you see the player vacuum pump, the organ preamp (to left of large wheel) and the swell pedal expression box below that. The little brown box at the very bottom is the chime multi tapped step-down transformer. 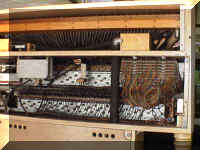 A view of the right rear side of the console showing the primary stack, the tubing and below that the preset setting panel and the tone generators. 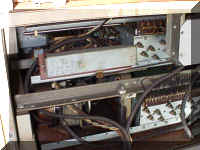 A view of the left side of the generator compartment showing the unique method of mounting the stacked tone generators. 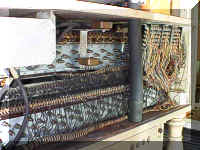 The center and right side of the console rear. The black tube is the vacuum supply to the player. Note the stacked oiling cups in the center of the picture. Oil put in these cups is distributed throughout the tone generators. 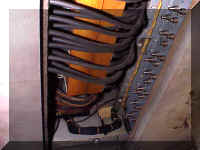 Underside of the organ looking through an access panel showing the main tone generator on the right player tubing and orange colored wood is a section of the pneumatic mounting board. 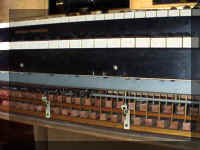 Looking from the front at the actuating pneumatics for the lower manual. these pnematics are located behind the sloping panel below the keyboards. 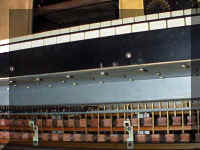 Another view of the pneumatics and pulls that operate the normal key contacts. The keys do not depress when the player is operating.

Aeolian-Skinner evidently purchased the Hammond mechanisms and installed them in their own cabinets designed to look similar to the "B" model. This plate inside the tone generator section identifies the mechanism as Hammond. 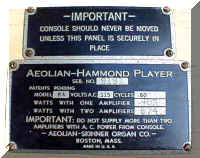 This plate mounted on the outside of the rear of the console clearly indentifies the organ first as an Aeolian then as a Hammond. This instrument was serial #9181. Note also the manufacturer, The Aeolian-Skinner Organ Company. 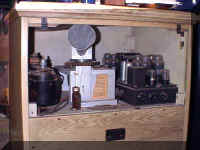 A view of the top portion of the Leslie 30A speaker. The little brown bottle is an original Leslie speaker oiling bottle! Note that the horns on this early model were made from paper mache'.

The identity plate for the Leslie speaker.

Here are some comparison pictures of the early model Aeolian/Hammond and the later versions. 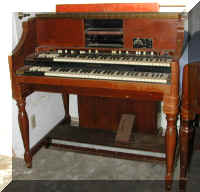 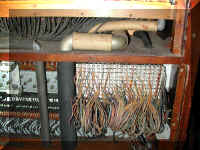 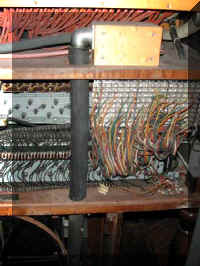 The right side of the BA console 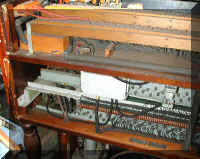 Picture of the left side of the early Hammond BA 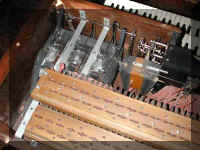 The vacuum motor and reroll mechanism

The left  picture shows the early reroll primary valve assembly on the left side wall of the console while the right picture shows the later  version. In the later BA note that the primary valves are located in the brown area between the opposing pneumatics that control roll direction  In the right picture, the orange tubing is going to the pneumatics that move the transmission gears from forward to reverse for play or reroll. 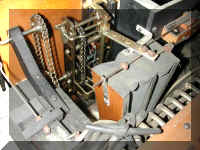 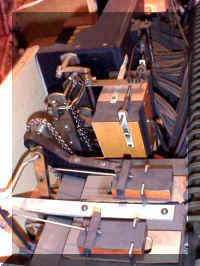 The transmissions, the early BA on the left, the later BA on the right. Right picture shows the brown area between the opposing pneumatics (center of picture) that houses the primary valve assemblies. 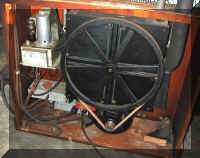 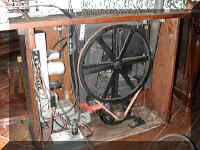 Status of the instruments

This instrument has been donated to a museum in Syracuse New York. The organ presently plays quite well and is used occasionally by the museum. Every  generator note works and all the keys seem fine both in feel and contact.  The player mechanism works fine.

This is the instrument I will be keeping. It needs a complete rebuild of the player mechanism but the Hammond portion works flawlessly. This instrument has vibrato rather than the usual tremolo found on instruments of this vintage. There is some question as to whether the vibrato was a retrofit or original. The BA instruments were generally shipped with the tremolo system but since this was one of the last BA's made and sold there is the possibility that is left the factory with the vibrato installed. I base this on the fact that there are no open screw holes where the older style preamp and brackets would normally be located. (This instrument has the newer style vibrato preamp). So unless they changed some of the wood work, it looks as if the older style preamp was never installed on this organ.

This instrument has also been donated to a music Museum, this one to a museum in Franklin, PA. I don't know if they have the organ up and playing or not. The organ was playing well on the main generator when they received it. The organ has been updated to silent drawbars. The player mechanism worked well except for reroll which caused the rolls to tear.

Back to the Hammond Products Page